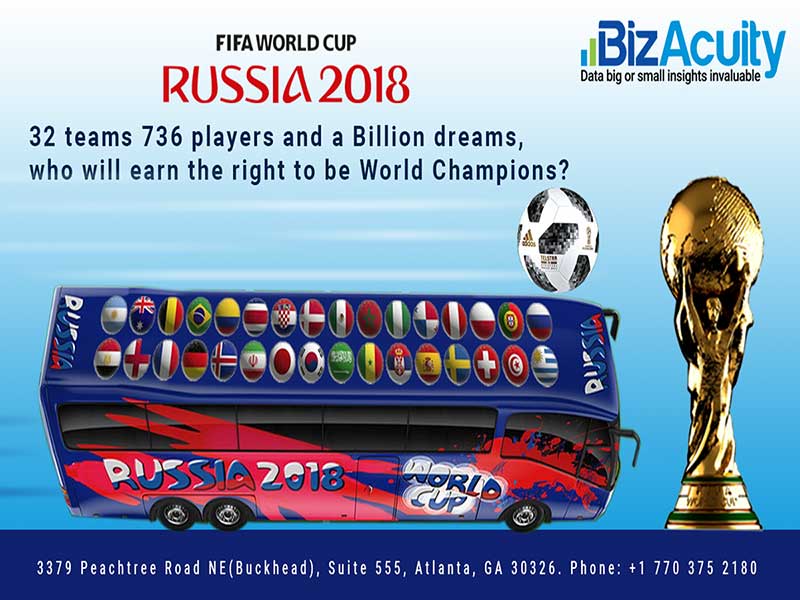 It wouldn’t have escaped your attention that a sporting event in Russia, with 32 teams and 736 players, is being watched by billions of fans across the globe before one team can earn the right to be crowned world champions. But who will win? There’s a whole lot of analytics being applied on those Russian pitches during the World Cup that many of us don’t know about. FIFA World Cup 2018 and Analytics has been quite baffling, the kind of simulations that have been pouring in from AI & machine learning Labs.

Goldman Sachs predicts Brazil will be the winner after simulating 1 million possible variations of the tournament in order to calculate the probability of advancement for each squad. In another AI-related simulation, Spain stands the second-best chance to lift the World Cup according to the study offered to the Cornell University Library. IBM Watson is offering their expertise to Fox Sports. The deal will help football fans create and cut highlights from the FIFA World Cup. IBM could deliver up to 100,000 hours of video footage to fans, including the best bits from the package using AI and machine learning.

For decades, scouts and coaches have used observations, primary data and intuition, but savvy managers today are using insights from advanced analytics to identify stars and undervalued players. Managers are using machine learning algorithms to calculate the quality, talent and value of players and identify the best combination of players possible ahead of the tournament. Best teams aren’t about best players, but the combination of best players.

Digitalization has had an impact in almost every aspect of football; media coverage, ticketing, and most importantly its capacity for teams to analyze and measure performance.  The unprecedented amount of data and information, that is obtained through IOT, objects that are connected to the internet, enables better customized training. Teams can collect large amounts of data on how individual sports persons perform in training and in actual matches. This data can be used to give highly personalized feedback. It also enables managers to make tactical decisions based upon live data during the game. Digitalization has transformed this sport from a game played for entertainment and leisure into a global industry. And it is not going to stop, with the IOT, VR & AR increasingly being used in training grounds.

Goal line technology is essentially a bundle of technologies that together monitor the path of the ball and detects when it crosses the goal line. There are several systems based either on camera-tracking or magnetic field sensors:

In the FIFA World Cup 2018 for the first time ever, the Video Assistant Referee system is being used to help make near-accurate decisions during games. As the game progresses, assistant referees away from the stadium, watch instant replays of incidents. Over wireless headsets, they communicate with the referee, advising them on any game-changing incident. VAR is supposed to assist referees in four main areas namely goals, penalties, direct red cards and mistaken identity. Although the final decision is ultimately made by the referee.

FIFA is making available at each match of the tournament a number of tools and communication equipment for both teams. Technical and medical staff of the participating teams have dedicated workstations on the media tribune and a dedicated line to communicate with the coaching and medical staff on the bench. Positional data from two optical tracking cameras located on the main tribune that track the players and ball will be available to the analysts in real time alongside live footage from selected tactical cameras. The insights from the technical information and the provided communication link allow for constant real-time interaction that can feed into their decisions during the match.

Football analytics depend on clarity & efficiency

Everyone can gather data, it’s what they do with it that makes a difference. Sporting events like FIFA World Cup 2018 contain a wealth of accessible, interesting data that can be turned into actionable analysis using data analytical tools. Technology will continue to develop which is likely to make analytics an accessory rather than a necessity, but ultimately, using data accurately is of great importance. It’s about being efficient, clear and concise with what you deliver. Efficiency continues to be the central theme of data analytics. Everyone is looking for the edge whatever the field maybe.

Algorithms, data and machine learning may never fully preempt the need for managers, coaches and experts but will definitely lead to improved decision-making. Similarly, analytics cannot account for every single eventuality, such as a star striker picking up an injury. But, using analytical tools, humans can begin to predict the results of games ahead of time using scientific methods.